What is Hybrid Pearl Millet?

Hybrid Pearl Millet is a form of pearl millet seed can be described as a cereal grain that is best known for its ability to grow in areas prone to drought (Kusaka et al, 2005). Pearl Millet is also defined as a warm season crop that gets approximately 3-6 feet in height depending on growing conditions it is placed in  (Myers, 2016). Figure 1 shows an image of pearl millet growing in a field. This crop is ideal for subsistence and low-resource agriculture because they are able to thrive in areas such as Africa and India where drought, low organic matter content, low clay content, leached soil, acidic soil, and high temperatures are relevant (Andrews et al, 1992). It also has quick root development and has the ability to utilize nutrients and moisture from the soil in an efficient manner. This is because of the plant’s long roots that descend both downwards and laterally into the soil (Myers, 2016). 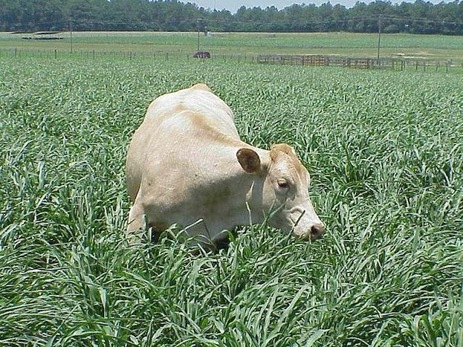 Hybrid Pearl Millet contains a high calorific value as a forage crop. As displayed in Figure 2, Pearl Millet has a higher amount of amino acids and a higher range or protein when compared to sorghum (Andrews et al, 1992). Pearl Millet have a higher digestibility rate because they do not acquire the condensed polyphenols much like the tannins which are found in sorghum (Vadez et al, 2012). Pearl Millet is generally composed of 69% of carbohydrates, 12% made up of  proteins, ash and fiber are approximately 2.5%, 5% is lipids and the remaining 11.5% made up of moisture content (Andrews et al, 1992). All of which aid in its overall nutritional value. 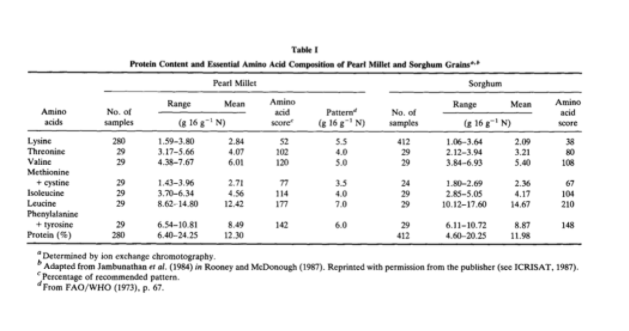