It is evident that Nepal is struggling in terms of being able to feed livestock, preventing land degradation, and economic issues. The use of Hybrid Pearl Millet seed may have the ability to aid in the improvement of all of these cases. Improving the variety of forage seed in Nepal may also lead to advantages regarding improved livestock health, prevention of land degradation, and improvement of the Nepalese economy.

Improvement of a Forage Seed
Unfortunately, Nepal is a country that is prone to drought, high soil toxicity, and diseases that are able to wipe out crop yields (Central Intelligence Agency, 2016). The Hybrid Pearl Millet is a warm season crop that contains excellent drought resistance properties and has the ability to survive in areas with little precipitation (Jain et al, 1997). This seed is also thought to have advanced soil acidity properties, meaning it is capable of withstanding acidic soils with a pH lower than 5 (Rai et al, 1999). Hybrid Pearl Millet is able to withstand higher levels of soil toxicity than Sorghum, which is currently one of Nepal’s most popular forage crops (Rai et al, 1999). Pearl Millet Hybrids are further more efficient at resisting disease and pathogens such as M. Incognita, which is a common nematode in corn (Timper et al, 2002). This seed could be an improvement for Nepalese farmers and smallholders who are trying to raise and sell livestock through the use of sedentary systems. 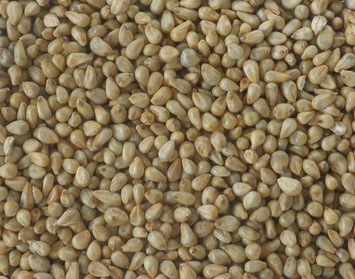 Improvement of Livestock Health and Sustainability
A major issue with Sorghum in Nepal is its tendency to produce prussic acid when undergoing drought like conditions. However, Pearl Millet does not produce Prussic acid, making it safe for ruminant consumption and grazing (Leblanc et al, 2012). Hybrid Pearl Millet has also been acknowledged for exhibiting greater gains in beef cattle and water buffalo (Andrews et al, 1992). This has been seen in pastures planted both early in the growing season, as well as late in the growing season (Andrews et al, 1992). This seed also holds a high amino acid, protein, and fatty acid content levels, which are beneficial towards its nutritional value (Andrews et al, 1992). This would make the Hybrid Pearl Millet seed a valuable asset to Nepalese farmers because they would be able to provide a safe feed with a greater nutritional value and higher yields. It would also allow Nepalese farmers to make a larger profit off of their livestock and livestock commodities. 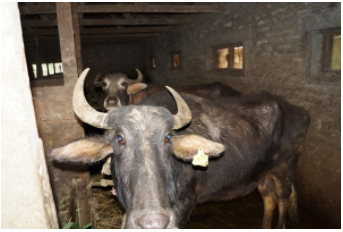 Retrieved from: http://narc.gov.np/narc/photo_large.php?photo_no=72
Useful As a Cover Crop
​Soil erosion is a common issue that deteriorates the land in Nepal as a result of poor climate conditions, steep hillsides, invasive human activity, and delicate geology (Zheng-an et al, 2016). Hybrid Pearl Millet is able to create a large amount of biomass aboveground as well as reduce the presence of weeds because of its effective nutrient uptake (Garland et al, 2011). Utilizing this seed may reduce the amount of labor for women weeding fields in Nepal, as well as minimize injury in women (Halbrendt et al, 2014).
​
Hybrid Pearl Millet Seed may also potentially aid in this preventing soil erosion on hills and terraces by its high-density roots which keep the soil bound together (Begum et al, 2014). It also has quick root development and can take advantage of nutrients and moisture from the soil in an effective manner. This occurs due to the plant’s long roots that descend both downwards and laterally into the soil to hold it together (Myers, 2016). By this logic Hybrid Pearl Millet seed could be beneficial to Nepalese hillside/ terrace farmers, as well as women. 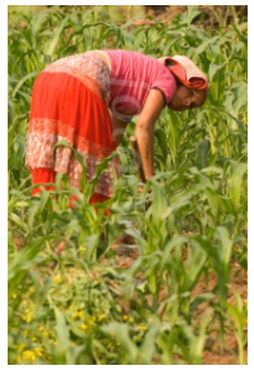 Retrieved from: http://www.fotolibra.com/gallery/666695/village-girl-farming-nepal/
Improvement of Economy
If Nepal were to import this seed from Canada they would likely be able to export their own livestock and livestock commodities, thereby increasing Nepal’s GDP and Export statistics (Moeller, 2012). With an Increasing yield of livestock and livestock commodities, the use of the Hybrid Pearl Millet seed may also allow for more job opportunities to compliment an increase in productivity and yields. Thereby lowering the poverty line in Nepal.