Nepal is a developing country in Southern Asia landlocked between India and China (Central Intelligence Agency, 2016). Out of all the countries in South Asia, Nepal has the second greatest poverty rate as well as the lowest income per capita (Pyakuryal et al, 2010). The country has a population of 29 million people with approximately 16% residing in urban areas and the other 84% residing in rural areas (Hussein et al, 2011). Figure 5 is a population density map of Nepal and shows that the majority of the Nepalese population reside in the terai regions.
Figure 1. 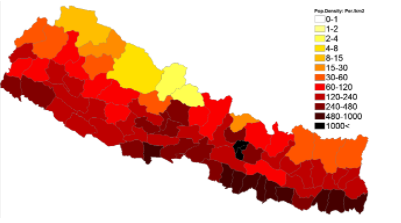 Retrieved from: http://popdensitymap.ucoz.ru/news/86_population_density_administrative_boundaries_map_of_nepal/2015-04-27-103
A major challenge for the socio-economic development of Nepal has been the diverse topographical landscapes and political instability (Hussein et al, 2011). This country also has a great deal of gender inequality as well as a very low human development index of 0.6 (Hussein et al, 2011). The terrain in Nepal can be defined by one of three ecological sectors: the terai region, the hill region and the mountain region (Hussein et al, 2011). In Nepal, 28.8% of the land is currently being used for agricultural purposes. 15.1% of the land is arable, 1.2% is permanent crops, and 12.5% is made up of permanent pasture (Central Intelligence Agency, 2016). Figure 6 is a map that displays the three major topological regions in Nepal: the mountain region, the hill region, and the terai region.
Figure 2.

Retrieved from: https://www.researchgate.net/figure/281202065_fig1_Figure-1-Ecological-regions-in-Nepal ​
Livestock and forage/ fodder crop production are mainly generated in the mountain region in Nepal in order for nepalese farmers to feed and raise livestock to make a profit (Giri et al, 2013). Seeing as Nepalese farmers do not have a strong access to modern farming technologies nor farming accessories, they are forced to follow traditional farming practices that labor intensive and require continuous upkeep (Bhatta et al, 2010). Many farming practices in Nepal are typically composed of monocropping systems that lack the usage of agrochemicals (Bhatta et al, 2010).
​
Agriculture is one of the largest sectors in Nepal because it represents 29.4% of the country's Gross Domestic Product and employs nearly 69% of the labor force in Nepal (Central Intelligence Agency, 2016). Employees in the agricultural sector mainly contribute to the processing of agricultural products and commodities such as grain sugarcane, pulses, tobacco, and jute (Central Intelligence Agency, 2016).

The land in Nepal is currently undergoing land deterioration issues such as crop reduction and soil erosion (Thapa, 2003). It has been discovered that wood is in demand to be used as firewood in Nepal, a result of rapid deforestation methods are used to meet this demand. It is this deforestation that creates these land deterioration issues in Nepal (Thapa, 2003). Due to the lack of fodder and forage crops available for Nepalese farmers, livestock declination is an unfortunate result (Shrestha, 2015). 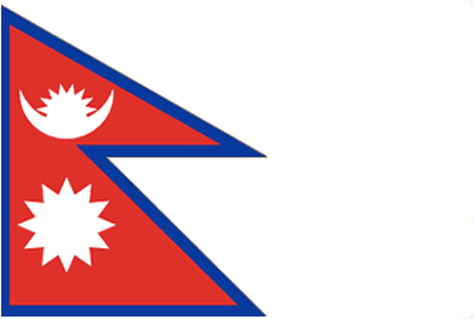